Two of the bigger stories this season are the Western Conference playoff race, and the massive tank job being pulled by teams without playoff aspirations. This is where those two stories intersect.

THE GREAT 9-TEAM NBA TANK-OFF IS HERE! ARE YOU READY FOR SOME TERRIBLE MARCH AND APRIL BASKETBALL?????? https://t.co/dwvTF98cYA

While tanking has been maligned in the last few seasons, mainly against the Sixers’ openness to tanking, this season has been especially bad. The likely outcome this season is that there will be 9 teams under 30 wins. For some context, over the last 6 seasons, as tanking has evolved into a more accepted rebuild strategy, 9 teams under 30 wins is the most since the 2011-2012 season that had 11 teams under 30. The kicker? That was the lockout shortened season with only 66 games. Sure it was also the Anthony Davis draft, but playing 16 less games hurts totals. Besides that season, 9 teams were under 30 wins in 2009-2010. More than 9 teams? I stopped looking after the 99-2000 season. Basically, it’s fairly unprecedented that this many teams are losing this much.

Again, if you want the West simplified, if you get to 47 wins, you’re in.

Now how does that affect the Western Conference playoff race? As great as getting a win against the defending champs was on Saturday night, having the Pels playoff hopes hinge on that kind of win isn’t ideal. So because of the way it’s shaken out and the fact that Minnesota and Denver play each other on the last day of the season, 47 wins is enough to guarantee a playoff spot. After Memphis had a 10 day stretch where they not only lost to the Hornets by 61 points but also beat Denver and Minnesota, I wanted to look at how these tanking teams had fared against the Western Conference hopefuls. Here’s the raw win loss numbers with some observations afterwards: 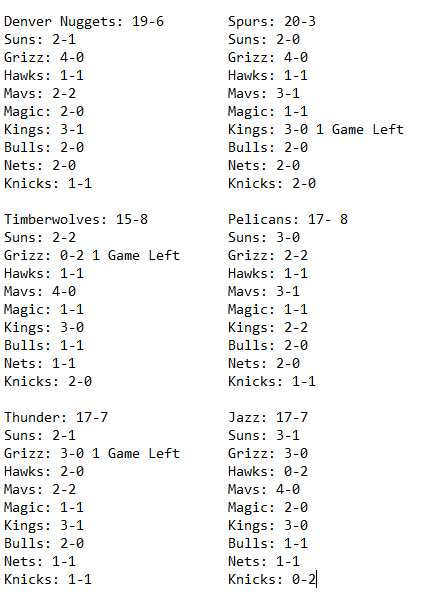 I wasn’t sure the best way to show this, but the Jazz, who were so far out of the playoff race before going 27-5 since January 24th, have only lost one game to this Dirty 30 group in that span. They’ve gone 11-1 against this group in that span. Also surprising, the entire playoff hopeful group has played well for the most part against these teams. The most important thing has really been the timing of when these wins and losses came. Last but not least, the Spurs. But of course the Spurs, part of their greatness over the years is that they take care of business against the bad teams and looking at Pop’s group, this season it’s no different, as they have won a whopping 87% of these Dirty 30 games. Their entire playoff hopeful existence has hinged on these games and it’s the reason why they’re still in the race. If they’d lost even one of these games, which they still technically could against the Kings on Monday, the Western Conference would be set. Ugh, thanks Pop…

Finally, I wanted to see which of these Dirty 30 fared the best. Plus it gave me a chance to play with a chart format that I don’t often use. Basically, the losses against the group are on the left and how they were spread out is on the right. 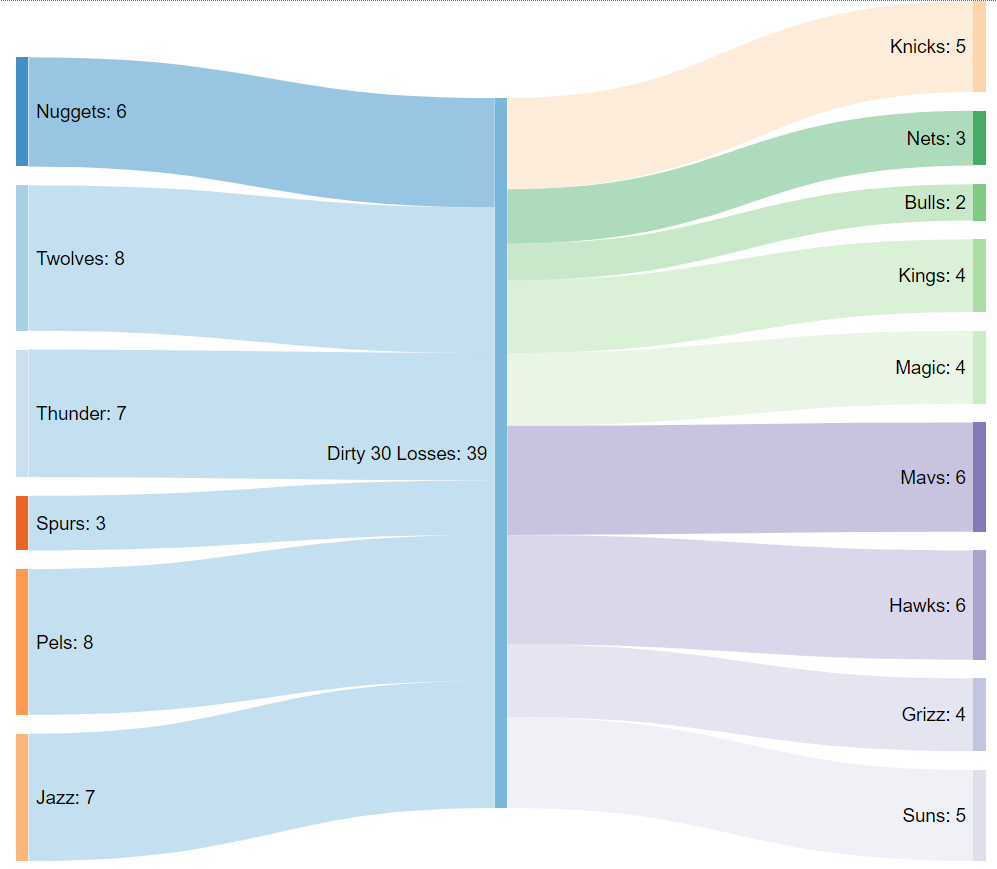 The Warriors Win and Returning to Relevancy

From New Orleans by way of Escondido, Luis Enrique is one of the original moderators of the Pelicans SubReddit and contributed work to the now defunct Stoop Sports.

This site uses Akismet to reduce spam. Learn how your comment data is processed.

Notice: We use cookies to ensure that we give you the best experience on our website. By closing this banner, scrolling this page, clicking a link or continuing to browse otherwise, you agree to the use of cookies. If you want to know more or withdraw your consent to all or some of the cookies, please refer to the cookie policy.OkRead more